The Château de Pougelon was built in 1662.The pavilion and service quarters are in a Henri IV and Louis XIII style. One of the famous heir of the La Font family is Antoine Guillin dePougelon, who inherited from his grand-mother Elisabeth. As a lawyer, he contributed to ennoble the family, and was involved in politics in Lyon. Generations later, Gabrielle Guillin de Pougelon marries the Count de Loriol, and becomes the Comtesse de Pougelon, feminine and emblematic figure of the castle. Unfortunately, her grand-son who was a gambler, will lose the castle at a dice game and will set fire to the archives.

That is when a second family became owner of the castle: the Lacroix family. Louis Lacroix was a silk manufacturer, who also contributed to move the Silk Stock Exchange from London to Lyon. He actively participated in the restoration of the main building of the castle, by creating the corridor which gives access to every room, and by renovating the main hall (last renovation in 1850). His grandson, a business man who owns the Brossette company (bought by Saint Gobain), contributed in the creation of the cooperative winery of Saint Etienne des Oullieres.

The third family to own the castle is our family, Descombe. An ancient link united us to the Lacroix, as it is Florent Descombe (2nd generation) who performed Ms. Lacroix’s and Mr. Bréchignac’s wedding at the town hall of Saint Etienne des Oullières in 1958 (strikes unabled the engaged couple to reach Paris).


The vineyard was originally composed of Beaujolais Villages, surrounding the property. After family Descombe takeover, it has been extended to other appellations.

From South to North :


The vines work occurs with a constant attention paid to thequality of the future wine and our impact on our environment and our soils :


The Patrice’s family created the Domaine Patrice in the 1950s, on the beautiful terroirs of the Chablis region. Originally cereal farmer, the father of Gerard and Christian Patrice transformed the family lands into vines.
Gérard Patrice, who was taking care of the winegrowing part, contributed to develop the vineyard on the appellations Petit-Chablis, Chablis, and Chablis 1er Cru Beauroy during 30 years. Thanks to his hard work, he became one of the pillars of Chablis. Initially a member of in the cooperative cellar, he decided in the early 2000s to build his own cellar in Beine, to make his own wines and bring his expertise to the wines of the property. As a true lover of his land, Gérard was focused on the cultivation of hisvines and on the winemaking. The wine was then sold in bulk to wine merchant partners.

In 2017, Gérard Patrice who’s always trusted the Descombe family, decided to transmit his heritage.
The Descombe family then created the Domaine Passy le Clou, to distribute the production in bottles. For this, investments were made in the cellar, by increasing the capacity of the winery, and adding small tanks which allow to vinify the entire estate production plot by plot since 2018.
The Estate is now composed of 21 plots scattered over the Chablis region, with distinctive characteristics for each of them.

Our values are to produce wines of exception, qualitative, by limiting the yields and by taking good care of our soils.
The winery presents modern production equipment, essential to making great white wines.


“ The Descombe family do not lack projects…”

Due to its central position in eastern France, we always have had special relationship with producers of Beaujolais, Bourgogne and the Rhône Valley region.

In 2018, the family decided to start a new adventure in the north of the Rhône Valley, by acquiring vines in the Saint Joseph and Crozes Hermitage appellations.

With a beautiful view on the Rhone river, the Domaine de La Haut overlooks the beautiful hillsides of this region.
With a deep commitment in staying near the Beaujolais region, others appellations in the North of the Rhône Valley will surely follow… 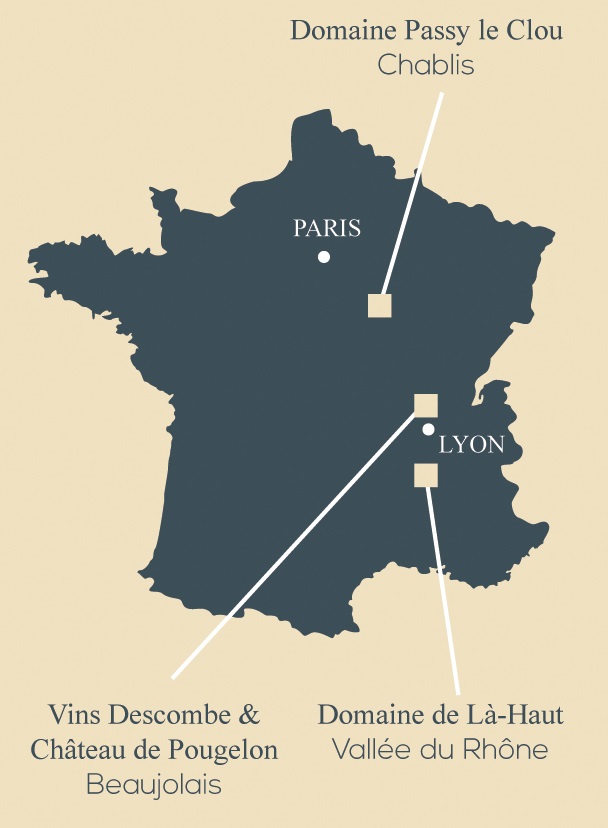